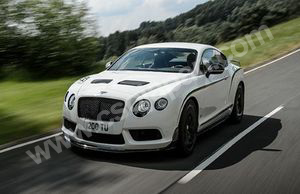 Bentley Motors is British Manufacturer of some of the finest cars that are known to man. These cars can be highly customized to make them look totally unique on the road. It is a respected name in the industry and is a direct successor of the Rolls Royce Company. It is a subsidiary of Volkswagen which owns it completely.
Bentley is fine car maker and has a strong history to back it up as a renowned manufacturer. It has also participated in the making of sports cars as well. With time its focused declined from sports cars but it has now launched its latest sports car to gain back the prestige it had once had.

Bentley introduced its limited edition of GT3-R, it newest sports car, which has been very well remarked by various analysts and enthusiasts. It weighs around 2.4 ton and can accelerate from 0 to 60 in less than 4 seconds which differentiates it from the rest of the vehicles that are produced by Bentley.

The Exterior is a class as well and made up of steel and aluminum. The design is terrifically done making it the perfect sports car. Bonnet is fitted with vents and the color of the whole body is striped green over black.

It is a two seat car which costs around 337,000 US dollars on its release and fit with a V8 twin engine with a capacity of 4 liters, 518 pound-feet of torque and 572 brake horsepower. The brakes are capable of absorbing about ten mega joules of energy is one braking action.

Bentley has not entered the sports car industry for the first time and history backs claims that it can be a tremendous sports car brand as well. Bentley Motors had won Le Mans on five occasions during 1924 and 1930. This time again they aim to win back the pride they once had.